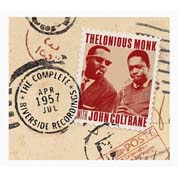 On more than one occasion in the mid 50s, John Coltrane was kicked out of Miles Davis’s band. The final time, in 1957, drinking heavily and using heroin on a regular basis, Coltrane also got himself slapped by Miles in front of a packed house one October night – apparently Miles had had enough of Trane’s unprofessional nonsense. One of the people in the crowd who witnessed the incident was pianist and composer Thelonius Monk, who thought it was a shame to knock down Trane’s talent for the sake of personal problems.

Monk, who had, a few years earlier, signed a record deal with Riverside, was recording regularly and offered Trane a chance to play with him. A genius composer with an eccentric but unshakeable command of the piano, Monk himself had spent almost a decade trying to find enough gigs to support himself when finally the Riverside deal made him a star. To that point, many bebop players assumed he was crazy.

As 1957 went along, and Trane played with Monk, he eventually experienced, as he put it in the liner notes to his masterpiece A Love Supreme, “a spiritual awakening which was to lead me to a richer, fuller, more productive life. At that time, in gratitude, I humbly asked to be given the means and privilege to make others happy through music.” In and around recording for Riverside with the clean and sober Trane over the spring and summer, Monk’s band then got a long-playing gig at the Five Spot club in New York. Trane, who was mentored by Monk and inspired by the advanced harmonic ideas in the composers, music and, seems to have almost perfected his improvisational approach in a few months.

The big news jazz release of 2005 was the rediscovered concert recording of Monk and Trane at Carnegie Hall, featuring a band in fine form and Coltrane sounding every bit his mature self on tracks like “Monk’s Mood,” “Blue Monk,” and “Epistrophy.” The Carnegie Hall concert happened in late November of 1957. The next month, Trane rejoined Miles Davis in the bandleader’s first great quintet. So the total amount of time Trane spent with Monk is seven months – a little over half a year in which the tenor saxophonist kicked his drug habit and found his voice as a musician.

Now, there’s nothing truly new on the new two CD release – Thelonius Monk with John Coltrane: The Complete Riverside Recordings. If you have the 15-CD master set Riverside released a few years ago, you already have what’s in this new package. But if you are a fan of Coltrane and want to hear the studio side of the musical story of Trane’s rebirth, then The Complete Riverside is a fine investment. On these tracks, Monk and Trane are joined by Wilber Ware on bass, Shadow Wilson and Art Blakey on drums, and Coleman Hawkins on sax. On two takes of “Ruby, My Dear,” listeners can find a very clear contrast between the sound and style of Coleman Hawkins and Trane. So, for you Trane fanatics, you have a fine complement to last year’s Carnegie Hall concert recording.
by Unknown No comments:

The Producer - John Hammond and the Soul of American Music 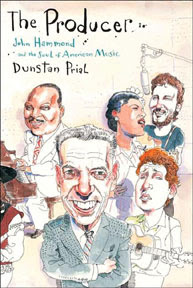 Nothing you will hear about the career of music producer John Hammond gets very far before it arrives at the List.

The List is that long train of names, those artists music producer John Hammond was first to sign and usually first to record.

Count Basie. Billie Holliday. Benny Goodman. Charlie Christian. Lionel Hampton. Teddy Wilson. Aretha Franklin. Bob Dylan. Leonard Cohen. Bruce Springsteen. Stevie Ray Vaughan. Even one of those names would be cause for acclaim – and Hammond brought them all to the rest of the world.

A trust fund baby of the plutocrat Vanderbilt clan, John Hammond had little real interest in the trappings of his wealth. He was too busy listening to his record collection. If he had a silver spoon in his mouth as a child, he took it out and pawned it to buy the latest Louis Armstrong record. As a young man, having drifted out of college and armed with his money and an encyclopedic knowledge of blues and jazz, he set about his work of bringing blues and jazz (that is to say, so called “race” music) into the mainstream.

With as good an ear for talent as anyone has ever had, a tireless passion for work, Hammond built a network of personal contacts with musicians and industry insiders, journalists, club owners, from coast to coast. By the mid-30s, if Hammond heard an act and liked it, there was a good chance the rest of the country would soon know your name. And we already know about The List. These days, Hammond would fit the role of an A & R executive – artists and repertory – but he was called a producer, because but there wasn’t much hands-on production to do in the 1930s. There was a mike, then everyone gathered started playing. Modern production techniques, with multitrack tape machines and other studio effects would develop in the 50s and 60s. But still, for decades, John Hammond was the man who made things happen, often without recognition. For instance, he had a hand behind the scenes in helping to create the Newport Jazz Festival.

All these details are the foundation of Dunstan Prial’s book, The Produer: John Hammond and the Soul of American Music, but this biography has deeper arguments to make. As a journalist for Down Beat and the progressive journal The Nation, as well as a longtime board member of the NAACP, Hammond helped guide the discussion of the issue of integration – not just through music, but through his words – thousands of them. Author Prial also argues that the integrated Benny Goodman Quartet from the 1930s (featuring the clarinetist with Teddy Wilson, Lionel Hampton, and Gene Krupa) did as much to enlighten the mainstream public about the humanity, talent, and equality of African Americans as Jackie Robinson playing for the Brooklyn Dodgers in 1947. And it is true that more people listen to music than watch baseball any day of the week – then and now.

In Prial’s biography, Hammond certainly comes across as a good man – perhaps a little stubborn or aggressive when it came to his principles, and a man who worked too hard and smoked too many cigarettes. But when he felt he was right – well, he usually was. If Hammond was in your corner, he’d flash you his big toothy smile and bob his crew-cut up and down, and off you’d go. This biography is a another towards making Hammonds name better known to anyone who has even a passing interesting in the history of 20th century American music.
by Unknown 1 comment: 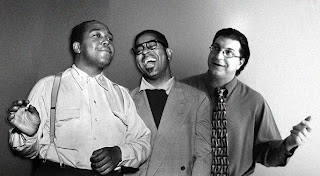 This image is the work of my talented wife Pamela, who kindly inserted me beside the twin stars of bebop, Charlie Parker and Dizzy Gillespie. The "original" image I provided had just the two of them, but I believe the true original has Buddy Rich where my greazy self is standing. I tried to find the most retro tie I could for this promotional item for my regular music show, Early Jazz Weekend Session, Saturdays and Sundays from 6 to 9 am. (Plug finished!)
by Unknown No comments: