As you read this, I'm most likely digging through the storage room to pull out all of the lights that I'll be putting up for the holidays.  It's not that we here in the Hayes House are particularly spiritual ("Put Christ back in Christmas!"), and it's not that we're particularly materialistic ("Which set of Christmas dishes should we use this year -- and do we have a matching gravy boat?").  But we have a couple of little boys, ages two and three, who love the music, and tree, and most of all the lights.  I have admit, much to my surprise, that I'm starting to get into the lights.  I mean, I want to Bring the Lights.
Few thing are more dull for readers than for a parent to write about parenthood, but I will say that having kids has changed me in ways I did not expect.  I find that I don't mind drinking Kool-Aid any more.  I have developed a fondness for non-Japanese animation.  I have come to regret my harsh words about Kenny G.  I know an old lady who swallowed a fly. And so forth.
But this is foremost: I love my Christmas lights.  I have a ladder, I have a staple gun.  I have special electrical cords to run serious amounts of electricity to even the most remote parts of the front yard.  I calculate that I have about 2,000 lights, which sounds like too many, but, of course, it's not nearly enough.  So, these days, if I happen to stop at the drugstore or hardware store, I pick up a box or two of lights -- red, green, or white, another 200 at a time.  I don't know exactly what I going to do with them yet, but-- but-- well, I'll take a picture when I'm done.  Clark Griswold is my hero.  His sufferings are my sufferings.  Perhaps, one day, I will have a lightshow as awesome as the one below. 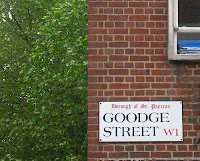 I spent a full summer in London during 2004. British food, I have say, for the most part, leaves much to be desired.  Good ales, great sweets, and decent Indian food -- but not as good as you would think on that last item, as it seemed a little bland to me, toned down for the English palate.  At any rate, just around the corner from my flat on Goodge Street was a Sainbury's -- just another big supermarket chain, but with at least one significant difference: The Sandwich Aisle.  It was an Aisle Entirely Made Up Of Sandwiches.  One can find the same sort of thing at Marks & Spencer and Tesco.
These days, I have my Google Reader rigged to forward my all kinds of stuff, and one of my news alerts is set to send me any and all items related to sandwiches.  As I expected, most of the world's sandwich news comes from England.  The sun may have set on the British Empire, but it will never sit on a UK prawn mayonnaise sammie.  Although I have, personally, sat on one.  Very messy indeed.
In honor of the holiday season, I present a rather healthy list from The Telegraph, "The 12 Sandwiches of Christmas."  Nom nom nom.