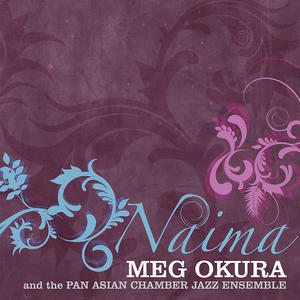 A confident collection of chamber jazz that is wide in scope and deep in feeling, follows the award-winning self-titled 2006, the second release from Meg Okura's group earns its audacious title, taken from one of John Coltrane's best-known and finest compositions. One imagines that, like Coltrane's, Okura's range of listening, playing, and traveling as a musician has lead to a natural preference for genre-blending and experimentation, andNaima does not disappoint in those respects. At its best, Okura's latest album boasts fresh textures and tones drawn from its eclectic blend of intstruments and its borrowings from 20th century orchestral composers.

The title track, “Naima,” is a reworking of Coltrane's ballad in which the Okura's lush rendition of the melody is carried forward over cycles of flute and piano arpeggios. The violinist's joyful improvisation rises above the work of her band mates on this song – perhaps by design. But everyone in the group rises to the occasion on “Hannah's Vocalise,” a tight number with a lyrical melody, quirky piano work by Mamiko Kitaura in counterpoint, as well as some excellent and subtle drumming from Willard Dyson. Okura's chops are on display in “Caprice,” in which she rips through a virtuoso cadenza alla Paganini, then settles into a fine Latin groove that features outstanding solos by Okura and Kituara.

Most far-reaching in its materials is the geographically-titled “Afrasia,” which opens with a driving interplay that features Jun Kubo on the Japanese shinobue flute, then, after a bit of Stravinsky-esque dissonance and transitions, drops into a subtle funk. “San San Nana Boshi” as well, offers a complex layering of instruments – reminiscent of Philip Glass – before the excitement gives way to excellent solos from Rubin Kodheli on cello and Orkura.

The jazz-only listeners out there might find the final section of Naima less noteworthy than the rest. The 25-minute suite “Lu Chai,” based on a poem by Tang Dynasy poet Wang Wei, is appropriately impressionistic. Opening with the dramatic “Empty Mountain,” the quite then moves to the wild “ Echo of Voices, ” perhaps the best section, but also a little too smooth in parts. The final pieces are more even in tone with the bittersweet “Sunlight” and peaceful “Green Moss.” Ambitious and challenging, “Lu Chai” suggests that Okura might have had Coltrane's A Love Supreme in mind when she was writing this homage to China's Poet Buddha. The suite may yet reward additional listening, to be sure.

Fully in command of the music as performer, composer, arranger, and producer, Meg Orkua offers a clear sense of vision of her world of music. Okura's Naima goes to many places, speaks in many voices, and is often rich with surprises and admirable in its aspirations. The work of a musician who is clearly interested in a musical journey, this album doesn't need to offer a sense of fully arriving. One suspects that, for Okura, the voyage – not the destination – is very much the most interesting part of her musical life. 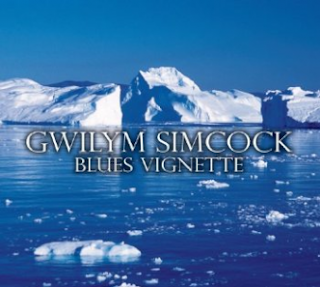 The latest release from the gifted, young pianist Gwilym Simock, Blues Vignette (Basho 2010), offers a welcome challenge – to listen carefully and not be restricted by the classifications of genre and style. Purists of one sort or another, who would define classical or jazz music as confirming to a short list of recognizable traits, will likely struggle with the over two hours of music on the curiously titled Blues Vignette, an ambitious double-CD that ranges from solo piano numbers, to a concerto duet for cello and piano, to the familiar – but fresh-sounding – trio of piano, bass, and drums. Gwilym Simcock is generous with his surprises.

The first disc seems to offer Simcock in what might be described as a “concert hall” mode, presenting the pianist alone, working through his ideas and showing his chops on his instrument or playing thought-composed pieces. Opening with a lyrical composition, “Little People,” Simock lets everyone know that his European training can swing as well. This is followed by two pieces in tension with each other, the serene “Exploration on Movement II of Grieg Piano Concerto” and the familiar “On Broadway,” which Simcock tears through, even utilizing the wood and metal guts of the piano for percussive effect. Shifting moods, Simcock then mediates over the keyboard in three “Improvisations.” Further exploration of the landscape of the piano happens in the dramatic “Caldera,” a composition which takes its name from a particularly interesting geologic formation found in volcanic craters. Simcock finishes his solo work with the dynamic “Jaco and Joe,” a study in left hand and right hand interplay named with musicians Pastorius and Zawinul in mind, one assumes. Closing the first half of Blues Vignette is the two part “Suite for Cello and Piano,” on which Simcock is joined by Cara Berridge, and the music here is thoughtful in a similar manner to the earlier improvisations.

More suited to jazz fans is the second disc, where bassist Yuri Golubev and drummer James Madden join Simcock in moving to a jazz trio setting. Always mindful of the order of songs on Blues Vignette, however, Simcock's “Introduction” to CD two sounds very “classical” indeed, right down to its bowed bass lines. “Tundra” is a brisk baroque swinger that could have come straight out of the Brad Meldau catalog. By the time we settle into the title track, the group is indeed swinging and moving through the blues in a angular, supple manner without ever losing its sense of collective groove. Most radio-friendly of the bunch is the cheerful “Black Coffee,” which finds an irresistible burn thanks to Golubev and Madden. Simcock's “Longing to Be,” “1981,” and Hamilton's “Cry Me A River” all have their pleasures, but a highlight of Blues Vignette is certainly the trio's work on Gershwin's “Nice Work If You Can Get It,” which has as flexible a sense of tempo as you can imagine but which never stumbles. It is an exciting display of collective playing.

One can often hear the jazz side of Simcock's musical influences Bill Evans, Keith Jarrett, and the aforementioned Meldau, but Simcock never seems to copy or resort to musical cliches. The challenge in encountering Simcock's prodigal talent is to listen with fresh ears to a full dose of musical ideas that are themselves quite new. There's not much proper blues on Blues Vignette, of course, but the music is nevertheless bent in interesting new directions, and Simcock certainly understands the transformation of the blues: playing about feeling bad in order to feel good. Come to think of it, with some 130 minutes of music, the release is anything but a vignette; Simcock must be having a joke at his own expense, and the pianist and composer is all the more likable for the irony. Confident, smart, ambitious, Blues Vignette shows a young talent coming fully into his own and points the way for even better music to come.