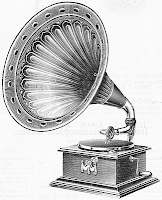 From the whiz kids at the UK Guardian comes a wonderful interactive timeline of the history of modern music -- in "all genres."  There's a complete section for jazz, along with pop, rock, R&B and hip-hop, indie, dance, and world and folk.  You can check out the timeline yourself and see how effective (or ineffective) the map may be.

With the all-marketing, all-the-time, all-media approach, it's a challenge to know what your personal taste is these days.

Reader's Notes - Susanna Daniel, 'On the the homogenization of reading'

A past guest on Passing Notes, Stiltsville

author Susanna Daniel, offers the view that, despite the news of unwelcome changes in the publishing industry in recent years, there are more books published than ever these days.  For her, the problem is that people might not be as selective in their reading choices or have as clear an idea of their personal taste.  Not like they used to.  In short, the real issue is that everyone seems to be reading the same books as everyone else.  Harry Potter, anyone?  Check out Daniel's essay at her website here. 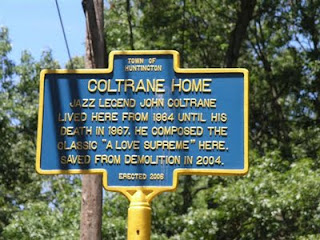 With budget cuts across the nation on all levels of government, funds for preservation of historic sites are dwindling.  Of particular interest to this blog is the house in Dix Hills, New York, where John Coltrane spent the last -- and perhaps most significant -- years of his life, from 1964 to 1967.  Just today, the house was placed on the list of 11 Most Endangered Historic Places by the National Trust for such concerns.  The Coltrane Home is a work in progress, a structure that needs renovation, expansion, and a sustainable structure of stewardship to preserve and maintain the musical and cultural legacy of John and Alice Coltrane. You can read stories from the New York Times and the Ottawa Citizen about the matter, or visit the website for The Coltrane Home. Pass the word along. As Trane said himself, "One thought can produce a million vibrations." 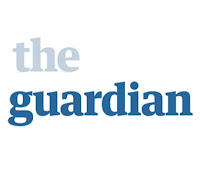 From the always interestingly opinionated folks at the books desk of the UK Guardian, here's a list of the100 greatest nonfiction books. It's hard to argue against most of the books here, but any list like this could just as easily be 500 titles long.  Read the article here. 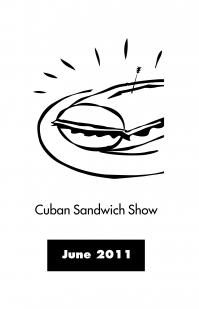 Having lived for the better part of two decades in either Tampa Bay or South Florida, I have become a fan of the Cuban sandwich -- one of the essential sandwiches -- which is made on Cuban bread with ham, roasted pork, Swiss cheese, pickles, and mustard, and then pressed for a flat, toasty-melted finish. I've eaten my share of Cuban sandwiches here in Miami, but I have to say that the best I've had have always come from Tampa.  From what I understand, in fact, the sandwich was "invented" in the old Tampa neighborhood Ybor City.
My pulse quickened -- although my heart shuddered for fear of cholesterol -- when I saw the headline for something called the Cuban Sandwich Show.  Was this a contest?  A tribute?  A celebration of one of the finest sandwiches of all time.  Actually, it's an art show held in Tampa in June under the sponsorship of the Artists and Writers Group.  Their slogan: "All Art-All Tampa-No Mayo."  If you're in Tampa this month, check it out.  And while you're there, head to The Floridian for a Cuban.  It's true - they're the finest.
I'll just have to keep working on that idea for a true Cuban sandwich festival and exhibition.