A little on the late side for the East Coast, but everyone should remember it's Free Comic Book Day, so get on the InterTubes and look up your nearest comic book vendor.  If I'm in Miami, I hit Outland Station, but one of the best in the country is Tate's in Lauderhill. 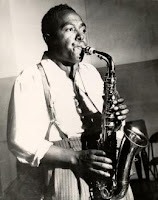 Footage is a little hard to find, but here are four good clips of Bird.

Chasin' the Bird: The Life and Work of Charlie Parker 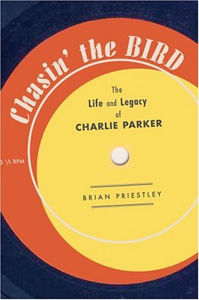 Charlie Parker, arguably the greatest saxophonist of all time, was born in Kansas City, Kansas, in 1920.  After that, it seems, the details begin to get fuzzy.
In his biographical study of Parker, Chasin’ the Bird, the Life and Legacy of Charlie Parker, author Brian Priestly tries to clarify some of the facts about the often confusing, contradictory, and catastrophic life of one of jazz’s most notorious figures.  As with any cultural figure who achieves iconic status – history has become legend, legend has become myth.  Sooner or later, the fragile truth’s of a person’s life become lost amid the babble of historians, critics, and fans.
Author Brian Priestly is the co-author of The Rough Guide to Jazz and has written biographies of Charles Mingus and John Coltrane.  He is a prolific critic and a respectable jazz pianist as well.  His knowledge of jazz is both broad and deep, and his Chasin’ the Bird examines the life and work of Charlie Parker with intelligence and restraint.  It is not an encyclopedia of all things Charlie Parker.  Rather, the bulk of the book traces what can be known for sure about his life, his music, and his personality.
There’s a fine bibliographical chapter for folks who would care to do their own research.  Given Parker’s relatively spotty, impulsive, and often-bootlegged recording career, the book’s sixty page discography will no doubt be useful to serious collectors.  Overall, Priestly seems comfortable with presenting you with what he admits is an incomplete and imperfect portrait of the man.  In the end, though, readers will likely appreciate the limits on authorial self-indulgence.
Most people making an effort to get to know the life of Charlie Parker –more than most usefully listening to his music – will have seen the Clint Eastwood film Bird, starring Forrest Whittaker as the legend himself.  But because Bird’s own life was such a mess, the movie creates more problems in point of view and chronology than it solves.  A few things are clear about Parker’s life. He had a challenging childhood; he was a musical genius, a virtuoso reedman and, essentially, the inventor of bebop; ; he yearned for larger material success and cultural recognition; he was an addict and an alcoholic; he was a victim of racism; some of his peers facing similar problems overcame them and prevailed; other peers could not overcome and succumbed to mental illness and drug abuse.  This is why, as Priestly suggests, the music is the most important thing to pay attention to.  Those fast, brilliant, perfect lines tell you almost everything you need to know.  Charlie Parker could fly in ways that folks never imagined before.