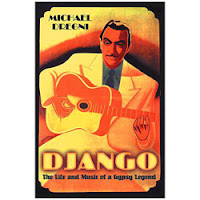 From the vault, a review of Michael Dregni's biography of innovative French jazz guitarist Django Reinhart.

Barcalounge Skipper - A Fan of MLB.TV

As much as I try to be in favor of the little guy (the smaller guy?) I have to admit that when it comes to sports, I'm a bit of a corporate shill.  Because I hate paying any more money than I must to the wretched cable television providers, on and off for years I've subscribed to Major League Baseball's audio package and made do with the basic cable slate of baseball games available on basic cable -- the national telecasts and regional coverage of both the Marlins and the Rays.  That's actually a pretty good range of baseball to watch, and I was able to listen to my team (the Red Sox) with the live audio feed of Boston's radio coverage for all 162 games.  It worked for me for several years. 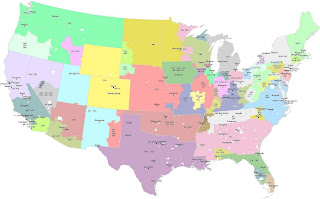 One issue related to baseball and television has always been the sport's arcane blackout rules -- I have attached the blackout map to the left here, but to see a full version of the map, click here.  The current blackout map is a leftover from the 1970s, when teams had regional broadcast networks and geographical access to both the signal and the team meant something.  The result of this completely silly system is that, if you live in the state of Iowa, you could have games of the Royals, Cubs, White Sox, Cardinals, Twins, and Brewers blacked out through any media.  If you're overseas -- as I was for much of the summer of 2004, when the Red Sox made their championship run -- you can't access the games online, either.  The obvious solution, of course, is that everyone, everywhere, should have access to all the games. Period. More viewers and listeners means more revenue; people who want to ballpark experience will still go to the park, even if parking is $20 and a beer is $10.
This year, I signed myself up for the big leagues' online video service, MLB.TV, and three weeks into spring training, I am thrilled.  Even with the basic package, I've been able to choose from about a half dozen spring training games all month, and, during the regular season, over 2000 more games. Not only that, all of those games are archived, so if I miss a good matchup from a few days before, I can always watch a replay on my own time.  And, if my eyes need to be busy, I can listen to the radio broadcast as well.  The connection is great, the picture is clear, and the controls are very easy to use.  The package costs me about $20 a month.
Even better, for a few more dollars, I can download to my iPhone an app called At Bat 11, which gives me the same package of video and audio on a fully portable device.  Although the video on a 3G connection can be a little laggy, WiFi works just fine, and audio is no problem no matter what the connection.
I hate to rave about MLB.TV and At Bat 11, but I am raving.  For the serious baseball fan who might watch a fair amount of out-of-market games, it's worth the money.  Now, if you'll excuse me, I'm going to go listen to a few innings of the Cardinals-Red Sox in the back yard while the kids play in the pool.