Undead Notes - Zombies on the Brain 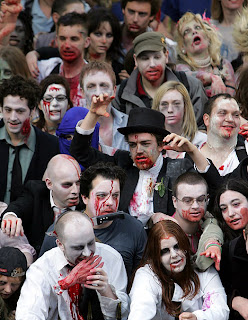 After a week's hiatus for the Thanksgiving break, I've risen from the dead to blog again, having feasted for a week upon the flesh of turkey sandwiches and cranberry sauce.  In the midst of my post-Miami Book Fair stupor, I can't say when it happened, but I managed to catch all but the season finale of The Walking Dead, and I will be tuning in at 10:00 tonight for the season finale.  I'd heard some talk in years past among friends about The Walking Dead comics, but with the babies and all I haven't really had the time to pick up reading a new title.
All in all, I've been a fan of zombies for some time, going back to the George Romero films -- which were very scary for a boy back then -- to The Serpent and the Rainbow, to the Doom and Quake video games, to the whole Resident Evil franchise, as well the more recent pomo efforts like Shaun of the Dead and Zombieland. From time to time, my wife and I have been known to pledge our affection and fealty "UTZA" -- until the zombie apocalypse.  I found a fine article on The Huffington Post on the ascendancy of zombies, so I'm going to suggest it as homework before tonight's finale of The Walking Dead.
In the hiatus between Season 1 and Season 2 of The Walking Dead

, I'll be mixing in reviews of that show's first season, plus whatever other zombie related material I can. Remember Rule #2: The Double Tap.