A grand total of 15 clips from the career of pianist and composer Dave Brubeck. Jackie Robinson, the African-American baseball player who, in 1947, was the first person of color to play in the modern major leagues, was on the vanguard of desegregation before most people in the country ever heard of him. During Robinson’s time as an Army officer during World War II, he was court-marshaled for refusing to move to the back of a bus, although he was later acquitted of the charges. In 1945, having signed a contract with the Brooklyn Dodgers, Robinson would still have to face, in 1946, a spring training in Florida with his assigned team for that season, the minor league Montreal Royals. During six weeks 1946, Robinson faced the first wave of racist resistance to his taking the field with white players in Florida communities such as Sanford, Deland, Jacksonville, Miami, and – to a lesser extent – Daytona Beach.

The color line is baseball was bound to have been broken sooner or later. The conservative, dictatorial first commissioner of baseball – Kenesaw Mountain Landis – had died, a vocal African-American and socialist press corps was demanding desegregation of the national pasttime, and black veterans who had fought racism and political oppression overseas were not going to tolerate it on American soil any longer. Add to these factors the tremendous amounts of money to be made by winning teams in the postwar major leagues – well, the talent of black ballplayers could no longer be ignored by the white baseball establishment. The Dodgers’ general manager Branch Rickey supported segregation in large part because he wanted to win: Jackie Robinson would be but one of the black players that would help the Dodgers to a championship in the 1950s.

Chris Lamb, the author of Blackout, does an tremendous job of depicting the outright suffering Jackie Robinson and his wife Rachel endured in that spring of 1946. Transportation and accommodations were so bad that the young Robinsons were unable to make the full trip by train from Los Angeles to Florida. In the Florida panhandle, they were simply kicked off the train. And, when they finally arrived in Daytona Beach, by bus, several days late, frustrated and humiliated, there was no place for them to stay and few places to eat. The Robinsons could rely only upon the generosity of an informal and inconsistent network of black citizens for their daily needs. Daytona Beach, proud home to the activist Mary McLeod Bethune and to Bethune-Cookman College, was in fact the most hospitable place they could find.

Daytona was marginally tolerant of people of color, but most other communities were not. Across the state, not only were the health care, transportation, and school systems segregated, but so too were restaurants and hotels, the bathrooms and drinking fountains, the beaches and swimming pools, as well as actual baseball fields. In many places, Robinson would suit up and take his position, only to have police officers order him off the field. Some grass and dirt, by law, was for whites only. Often, Robinson wasn’t even allowed to sit next to his white teammates on the bench.

Again and again, author Lamb has unearthed horrifying examples of just how commonplace and brutal jim crow was during the 1930s and 40s, and, balancing that, he finds as well many heartening stories of those now-forgotten heroes who helped Jackie Robinson along the way.

Somehow, although he came as close to quitting that spring as perhaps during any time in his baseball career, Robinson made it through. He played when he could, and when the season started, he was the Montreal Royals starting second baseman, leading them to 100 win and the league championship, leading the league it hitting, baserunning, and fielding. The following year, as many of you may know, he started the season with the major league Brooklyn Dodgers, putting a far more public face on the cause of desegregation. 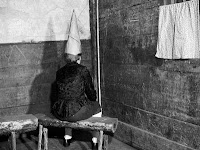 From the archives, a proposal to bring back the village idiot.