An interview with R. A. "Stovetop" Lawson about the early history of the blues and his new study, Jim Crow's Counterculture: The Blues and Black Southerners 1890-1945 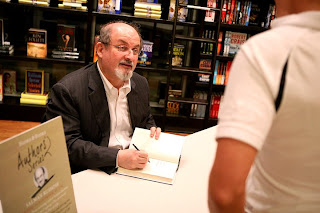 Sir Salman Rushdie talks about his new novel, 'Luka and the Fire of Life,' as well as Frank Zappa, U2, the work of writing, adaptations of his books into other media, and (almost) acting in 'Talladega Nights.'