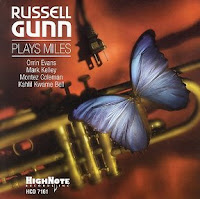 Between No Faith and Extreme Faith

One of the books recently bobbing around at the tops of the bestseller lists is scientist Richard Dawkins’s atheist critique of religion, The God Delusion.

In clear and accessible language and arguments, Dawkins lays out his position that there is no proof of the existence of God, so he does not belief. Furthermore, Dawkins argues that there is no special need to believe in anything more grand that the explanations of science about the natural world works and no reason to have faith in a moral system beyond what most secular societies have already worked out for themselves.

That’s the reasonable and friendly part of his argument. Dawkins begins to step on some toes when he offers a scathing analysis of the extreme violence of Mel Gibson’s Christian blockbuster, The Passion, or of the indoctrination of children into one faith group of another (which he likens, at times, to child abuse), and to the general dangers inherent in most forms of religious fundamentalism. As interesting as The God Delusion is -- and I think anyone interesting in critical thinking or the place of religion in society should read it-- the book at times does seem like an example what is coming to be called “Militant Atheism.” As to whether Dawkins is truly militant or not, I’ll be happy to let you decide. The God Delusion is, if nothing else, a provocative read. 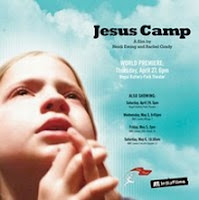 Speaking of militants and provocation, I recently watched the DVD of Jesus Camp, a documentary film by Heidi Ewing and Rachel Grady, a staggering look at the role of children in the present day Evangelical movement in the United States. Home-schooled far from the clutches of the nation’s (mostly) secular schools, banned from reading Harry Potter and The Lord of The Rings, these children are told time and again by the well-meaning adults in their lives that “the world is a sick old place.” More to the point, in their weekends and on their vacations, we get to see how some of these children are being trained as soldiers for Christ. I don’t think this is an exaggeration, although it would seem so just to read it here.


Over and over we see the children in Jesus Camp as your as 8 or 9 emotionally overwhelmed by adult descriptions of hell or abortion or the Rapture and the horrors of the “sick” secular world. These vulnerable young people are gradually brought around to militant views of their own, or so it would seem, and say they are prepared to lay down their lives for Jesus. As the head children’s preacher tells the camera, in effect, “They’re doing this in Islam, so we better start doing it here.”


I was so affected by Jesus Camp that I had to stop watching it several times. For me, as a teacher, to see adults imposing such extreme views of children and doing it with so much emotional manipulation – on children who really have poorly developed critical thinking skills – well, let’s just say that any educator would find such militant indoctrination highly unethical. But, you know, you can watch Jesus Camp for yourself. I’ll let you decide for yourself. We don't really go in for indoctrination here at Passing Notes.


It would be my hope in the end that the Militant Atheists and the Militant Evangelicals – though they would seem to never be capable of agreeing with each other – can teach the rest of us a lesson about the need for shared values, for a common set of facts upon which we can all agree, and for building consensus with each other about what’s important to most of us and what we should do about it. But often -- perhaps moreso these days -- the screaming from the fringes makes so much noise that the rest of us can hardly hear ourselves think.
by Unknown 1 comment: 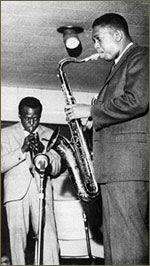 Where did all the rich people go? Yes, the Superbowl has left Miami and, really, nothing needed to go back to normal because very little was different for most of us South Floridians during the week of the big game. It rained some; I don't think football had anything to do with that, however.
This week's Passing Notes (Friday 7:06 pm on 88.9 FM Serious Jazz) is a dual review of Richard Dawkin's bestselling critique of religion, The God Delusion and the documentary film Jesus Camp, recently released on DVD. We're looking for some constructive common ground, here.
Saturday will feature another edition of Straight, No Chaser: The New Music Hour (8:00 to 9:00 am on on 88.9 FM Serious Jazz) with Ed Blanco and myself. Right now I'm still working out my picks, but Ed as usual is all over the latest releases and has got a great list drawn up. Finally, we've got a wide array of stuff to choose from now that the holiday grot has been cleared from the pipeline. SNC follows, as always, a pretty regular show of blues and jazz for Early Jazz Weekend, which starts at 6:00 am.
Sunday's EJW will be laid back. Memphis sounds and country blues in the Big Six Blues Set, with a healthy dose of Bird, Trane, and Miles. I'm kicking back this weekend.
by Unknown No comments:

4th Chair Trombone - What Black History Month Means To Me 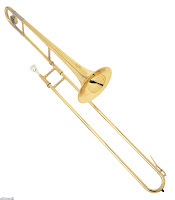 An audio version of this post is available at Flak Magazine.

I started playing trombone in the fifth grade – at the very beginning of the 1980s. I was a tall kid, and the adults around me figured that my arms were long enough to play the trombone with its long slide – way out to 7th position – and shoulder-mount, like a bazooka. By the seventh grade, I was playing 4th chair in the junior high jazz band. Our music teacher, Mr. Richards, taught to play simplified versions of charts made famous 40 years earlier by bandleaders like Count Basie and Duke Ellington. “Alright, OK, You Win,” was a particular favorite of mine.

When we started, a bunch of pimply white kids in a gymnasium in rural Maine, we couldn’t swing a note to save our lives. Swing? Swinging? Swinging was what you did on the playground. What is this syncopated dynamic of which of you speak, Mr. Richards? One evening before rehearsal, Mr. Richards made us listen to Count Basie.

The kids in the band were used to reading music, to metronomes, to counting up and down, up and down. But to swing, you had to know the beat, and then forget it just enough to feel the possibilities of rhythm within the beat. It was this feeling, this intuition, necessary to swing, that fascinated me so much. That’s what we heard – or at least some of us heard – when we listened to Count Basie.

About the same time, I heard the playing of Stevie Ray Vaughan, that overpowering blues guitarist from Texas. When I heard the first track from that first album, those bending licks that open the driving song “Love Struck Baby,” something went through me. From that moment forward, I wanted a guitar, wanted to learn how to play it like Stevie Ray, and, for better or for worse, I shifted my focus from the trombone to guitar and never looked back.

And also, it seems about the same time, an unusual song began appearing on the radio, a mix of synthesizers, samples, drum machines, and something called scratching. The song, “Rockit,” by Herbie Hancock, with its outerspace sound and superstrange video, was unlike anything I’d encountered before. I couldn’t get my hands on a copy of the album Future Shock. The guy at the music store offered to order it for me, but I didn’t bother.

About a year later, flipping though some the record collection at the university library, I found an album by Herbie Hancock, in particular by the Herbie Hancock Quartet. This was Hancock in performance with Ron Carter and Tony Williams and the new phenomenon in jazz -- trumpter Wynton Marsalis, who was all of 19 years old. Now, I thought I might be getting the same futuristic mix that I heard on “Rockit."

I listened to the whole album, and in those songs, I heard the swing of Count Basie and the blues of Stevie Ray and the imagination of “Rockit.” Ah, this felt like home. It felt I suppose I never really looked back from that point. Following the musical links from that single Herbie Hanock album I went all the way back to Miles Davis and Charlie Parker and forward to the very best of the acoustic jazz revival of the 80s. Stevie Ray Vaughan led me back to Albert King, Albert Collins, Freddy King, Elmore James, and Buddy Guy. From those few songs I heard years ago, a whole lifetime of listening has grown. Here was a music – blues and jazz -- it seemed to me, for which I’d been looking my whole life – it had honesty and raw energy, creativity and imagination, and offered me a view of the world that, as different was it was from my white, rural existence, still rang true. The struggle, the striving, the playfulness in the music were all things I felt I needed in my life.

Over the years, the musical traditions that began with African-Americans, in college and in my work, have led me deeper into the literature and history of the United States, into, as it were black history and culture. Now, an awareness and importance of race and class is essential to what I do in my work as a teacher and writer.

It is often said that jazz is really America’s classical music – and that is a properly broad idea, it seems to me. It should also be pointed out that black history is really American history, and our lives are all the richer for acknowledging that truth. Hopefully, one day, we won’t even need a black history month. But for now, I for one am grateful for the bits and pieces of African American culture that found me when I was a kid, and which have lead me to a far richer understanding of who I am, who other people are, and our place together in the world.
by Unknown No comments: 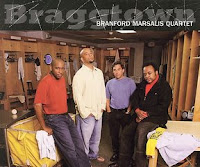