Italian director Lucio Fulci's "sequel" to Dawn of the Dead is sometimes found under the title Zombi 2, but the hoards of zombie flicks -- ripoffs and otherwise -- in the 1980s would only confuse any numbering system.  We'll call it Zombie and leave it at that -- not the first word or the last word in ghoulish cinema, but a film of note to be sure.

The poster at right pretty much sums up what there is to know about Zombie: It's quite deliberately over-the-top in terms of undead gore -- as well as violence and nudity.  How about that tagline: "We are going to eat you!" No zombie actually says that, but you get the idea.  Taking the more gruesome realism of the modern zombie film and wedding it to the traditional mythology of the Caribbean island zombie, Fulci takes the best of both worlds and creates a uniquely deranged picture of a zombie epidemic.

Until recently, most if not all copies of Zombie on VHS and DVD were lousy, but I had the pleasant surprise of watching the 2004 transfer and remaster by Blue Underground.  This version really showed off the (sometimes) excellent cinematography and makeup, although not much could be done to help the soundtrack -- with its dubbed voices and synthesizer music -- a particular source or irritation for me.  If you're planning to watch, make sure you have a digital transfer from after 2004.  If you want a taste of the potentially poor screening experience, watch this trailer for the film.

Another note about the film is its violence and gore -- which, even today, are likely to make most viewers squirm.  I'll assume that if you're reading this far, you don't mind a little gore --but as I mentioned, Zombie goes out of its way to provoke.  It earned a special degree of scorn in 1979 from the British Parliament, in fact, helping to give rise to the term video nasty and the now defunct 1984 Video Recordings Act.  Shades of the PMRC anyone?  Here's my suggestion: Look at the lobby poster for the film (above) and judge for yourself.

The plot is simple:  Anne (Tisa Farrow) learns that her father's boat has drifted into New York Habor, its only passenger a shambling hulk who attempts to eat a member of the Harbor Patrol who's investigating the abandoned vessel.  Meeting resourceful reporter Peter (Ian McCullouch), Anne agreed to go to the Caribbean island of Matool to find out what might have happened.  Arriving in the tropics, they join up with boat-owners Brian (Pier Luigi Conti) and Susan (Auretta Gay) to find the island.  On Matool, Dr. Menard (Richard Johnson), who works at the the island's mission clinic, is trying to find a scientific explanation for the "curse" of zombies that is beginning to overrun the place.  His wife Paola (Olga Karlatos) wants badly to leave, but Dr. Menard must find the source of the "curse."  In the end, of course, only a few of the main characters survive, and as they sail away, news reaches the ship's radio that increasing numbers of undead are appearing in New York.

While the plot is simple, the narrative lurches along -- slow and clumsy in parts, then surprisingly precise and effective in others.  Fucli is at his best in the scenes were he's trying to horrify you; he's at his worst in the interim, filling it with clumsy expository dialogue and, perhaps more compellingly for some, a great deal of nudity.  I feel compelled to point out that both Auretta Gay and Olga Karlatos had a generous amount of nude or nearly nude screen time in a manner that was nothing but exploitative -- there was no subtlety or cleverness to it at all.  Getting a little bored?  Here's a few minutes of naked!

Two now-famous scenes are cited from Zombie.  The first is a cleverly conceived but clumsily executed underwater fight between a shark and a zombie.  Fair enough, and probably mind-blowing for audiences at the time.  More gruesome is the lead-up to the death of Paola Menard, who, left at home one night, after a very thorough shower, attempts to fight off a zombie home invasion, only to have her eyeball impaled on a shard of wood.

Without a doubt, the most effective scenes in the film come in the third act, when the Matool zombies are out in full force and bashing down all the walls and eating everyone.  Clearly, Fulci planned out many of these sequences, which are well-paced, interestingly shot, and with truly gruesome makeup effects and mindless performances by the lead zombies.  Most effective is how the story calls for all dead to rise from the graves, including the bodies of those dead centuries before, whose degree of decomposition is truly remarkable.  The lush beauty of the jungle contrasted with the rot of the dead is extremely striking.  Peter and the gang put up a good fight as they attempt to get away with their asses unchewed -- although it takes them a little too long to figure out the effectiveness of the head shot.

Gross and exploitative, unevenly plotted, and suffering from dubbed dialogue, Zombie is nevertheless a fun movie.  It's simple premise is best executed when the director is trying to shock and horrify you.  If you don't ask much more from a movie than that, let the dead walk among you.

NOTE: This review is cross-posted at Mort-Vivant, my blog about zombies (and science fiction and comics). These cross-postings will continue until Halloween 2011, when Mort-Vivant finally walks alone! 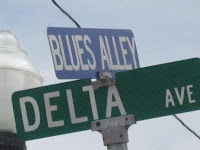 It's been a long journey to reach the heart of the blues -- take a trip to the Delta.