Over at the jazz blog Groove Notes, Kevin Kniestedt is plugging away at what I initially thought was an ambitious, daunting, and possibly insane project. Maybe not insane, but certainly out there. What Kniestedt proposed was the construction of a list of the 1000 jazz albums you should hear before you die. I like the parameters of this list -- you just have to hear them, maybe not even listen, and by no means are you required to purchase or download them. Pft, perhaps even the notion of the album is an antiquated one for all I know. Good luck to you, Kevin I thought. That first list of 20 albums is easy-peasy, but good luck picking 980 more.

Right now Kniestedt is sitting at 340, with another 560 to go, and on each list I find a few albums that I've not only listened to, but actually own. And I'm not going to embarass myself by indicating how many albums and/or CDs and/or downloads I've got in my jazz library. It is a large amount. But even on the latest list, three are in my collection: Sun Ra's Atlantis, Wynton Marsalis' Black Codes (From the Underground), and Joshua Redman's Wish. Another eight I've listened to (at least a few tracks) and I would agree that they're pretty good.

So, if we might offer Brother Kevin our interest and support, I think he could use it. So far so good, but there's another 28 lists to go. Let's hope that when he reaches 1000 -- after much thought and debate -- we might be able to find another 1000 albums to listen to as well.
by Unknown No comments:

I recall a glorious time in March during the mid-90s when I managed to see four baseball spring training games in two days – at the old Devil Rays’ field in downtown St. Petersburg, at the old Phillies’ park in Clearwater, then the next day at the Blue Jays’ field in Dunedin and the Yankees’ place in Tampa. There couldn’t have been more than two hour’s total driving to all those parks, my total for tickets didn’t crack 40 bucks, and there was much beer and sunshine. And the world was good.

These days, spring training is a bit more swanky here in the land of the Grapefruit League, but it’s still a wonderful way to see baseball in a more raw form. Plus there are guys playing who have three digit numbers on the backs of their jerseys. “Let’s get on base, number one-hundred-and-twenty-one!”


I’ve got the Mets and the Marlins/Cardinals a short drive to the north. I can tolerate the Marlins, and the Cards are fine, but the Mets just suck. What I really do is look for the Red Sox – who train on the West Coast in Fort Meyers -- to come through the area for that rare away game here on the East Coast. And I have my game in sight – March 9 – with Marlins tickets going on sale very very soon. In the meantime, maybe I’ll grab myself some actual Sox tickets. They go on sale this coming Saturday at 10:00 am. I’ll have my redial button ready. 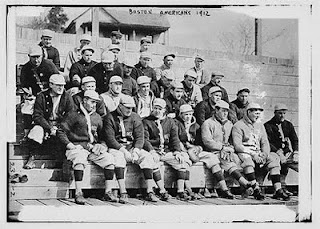 I include a photo of the 1912 Red Sox, who trained that year in Hot Springs, Arkansas. The many pleasures of Arkansas aside, it does not appear to have been a particularly hot spring in Hot Springs.

I could go MLB's official website for all my spring training gumbo, but I prefer Spring Training Online, a blog which does away with much off the razzle-dazzle and garbage.
by Unknown No comments: