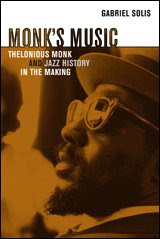 Here at the start of the 21st century, it’s no great shock to anyone to observe that pianist and composer Thelonious Sphere Monk (1917-1982) was one of jazz’s most enigmatic figures and is now one of its greatest. But that greatness was not always so – not at all. Monk’s Music: Thelonius Monk and Jazz History in the Making, by Gabriel Solis, examines the origin, evolution, and current standing of Monk’s place in the jazz world.

Solis, an assistant professor of music at the University of Illinois Urbana-Champaign, blends cultural theory, biography, and musical analysis to show how Monk's importance has grown -- first in the closely focused avant-garde, to the present where he’s declared as an influence by musicians of all kinds.

First and foremost, the author concisely explains what is generally understood to be as Monk’s distinctive compositional and interpretive style – its developmental logic, musical unity, call-and-response, and riff-based, as well as Monk’s unusual feel for time – his sense of swing – and the playfulness of his work. As many musicians have observed, Monk’s music inhabits its own world – its own sphere, let’s call it – and Solis effectively examines the dimensions of that world.

Solis spends some time discussing Monk as a pianist and bandleader, and how Monk was at the center of modern jazz's creation during the 1940s, how he proved to be an influential teacher to many leading musicians of the 50s (Coltrane and Rollins, to name a pair), and how the canon of Monk’s work – not a tremendously large number of songs but certainly unique ones -- set the stage for the all kinds of experimentalism in the 1960s and '70s. As much as Monk contributed to bebop, he also pointed to realms beyond it.

The much of the weight of Solis’s discussion in the later parts of the book falls on the jazz canon itself, the mainstream and the margins, as well as the ways in which Monk, an outsider in many ways, came to be seen as one of the music’s truly original geniuses and, as such, a sort of emblematic figure of the entire genre -- along with Miles, Satchmo, and the Duke.

Chalk it up to Monk’s appearance on the cover of Time in February of 1964 and a sustained campaign on Monk’s behalf by cultural critic Martin Williams. In the move to make jazz into “serious music,” it needed to have “serious composers,” the idea of the composer modeled after European icons like Mozart and Beethoven – the artist as solitary hero. Solis is most engaging in his discussion of Monk’s work into the context of “conservatory jazz” and neoclassicism – embodied in the institutions of Jazz at Lincoln Center – and the mainstream.

Solis examines how musical lineages are created and, in the process, addresses the issue of how musicians use performance itself to continue, interpret, and dispute the history of musical tradition. He develops in great details the work of pianists Fred Hersch, Danilo Perez, and Jessica Williams in their relation to Monk’s music. The Art Ensemble of Chicago’s performance of “‘Round Midnight” provides Solis with a rich discussion of Monk and the avant-garde. And more contemporary performers like Steve Lacy and Roswell Rudd are presented as finding different and countermainstream directions through the vehicle of Monk’s music.

As to any musician’s place in the “jazz canon,” whatever that term may mean, Solis wisely gives Monk the final say in the afterword, quoting the composer’s answer to the question of where jazz was going. “I don’t know,” responded Monk. “Maybe it’s going to hell. You can’t make anything go anywhere. It just happens.”

Always light but carrying weight, never easy to figure out despite its apparent simplicity, Monk’s musical legacy receives a fair-minded and thoughtful treatment in Solis’s book, which is well worth the trouble of both the casual listener and the serious musician.
by Unknown 2 comments: