Out in San Diego at Comic-Con 2009, the Eisner Awards have been announced, with Chris Ware (whose Jimmy Corrigan, the Smartest Kid on Earth, should be read by everyone) and Mike Mignola of Hellboy fame both having big evenings. With so many superhero, science fiction, and fantasy movies driving popular culture these days, it's always a good idea to keep an eye on Comic-Con. Plus you can always just ogle the people who dress up as characters. This year's Eisner Awards. . .

There's a South Florida tangent to these awards, as Tate's Comics of Ft. Lauderdale won the Spirit of Comics Retailer Award. I usually buy my comics in book form, but when I do visit the comic store, I tend to go to Outland Station here in the burbs. But I see that Tate's offers the occasional Japanese food tasting events, so I'll be sure to make the drive. Tate's website. . .

And finally, a graphic novel of note, as the hype tells us, TEN YEARS IN THE MAKING!!! I would be writing about David ­Mazzucchelli’s Asterios Polyp. There's a smart piece of criticism about it in the New York Times Book Review. For those of you who might remember Mazzucchelli's adaptation (with Paul Karasik) of Paul Auster's City of Glass, you should be happy to know you'll be travelling in a whole new realm of metafiction with Asterios Polyp. I've got my copy on the way today.
by Unknown No comments:

I've been saving this wonderfully sarcastic piece from Claire Zulkey, a fine writer who (like me) wrote for the now largely retired Flak Magazine. She's constantly working. In reading this piece the other day, I became mindful of how truly annoying some parents can be, constantly talking kid-shop to anyone who will listen. By "some parents," of course, I mean myself. Claire offers all those child-skeptical folks out there a chance to join her club. And if you don't join her club, at least read her blog from time to time.

As a counterpoint to Zulkey.com and an offering for lovers of music, I hope you'll take a listen to an NPR feature on Diana Krall broadcast this morning. Ms. Krall talks about going on tour with her two toddlers. They don't play in the band, from what I hear, but they do eat and poop in a variety of hotel rooms. There's additional audio from Steve Inskeep's reporting, and the webpage comments are amusingly weird and gushy. Who doesn't know that Krall is married to Elvis Costello? Follow and listen! Radio is a sound salvation. Radio is cleaning up the nation.
by Unknown No comments:

I’ve been thinking about Michael Jackson and Lance Armstrong these days – that is, the comeback that never happened for the King of Pop and the comeback that might happen for Mellow Johnny. It’s not so much the struggle to reach the top again that intrigues me as much as that question, “Where have you been?”


In 2007, after a good eight years of freelancing as a writer, my wife and I had our first child. Although I kept my day job, I didn’t write anything for public consumption in almost two years. Anyone who has had a child and has been involved in the day-to-day details of parenting knows how unprepared even the most typically prepared of us feel when the baby bomb goes off and the little bundle arrives home. And, for us, before Baby One was even a year old, we learned that Baby Two was on the way, necessitating a big move to a bigger home just around the corner from my day job. Between baby care and home relocation, I had no spare time to write, much less read. Much less think.


Let me just say that I know for sure nobody misses my written (or radio) work to an extent that is in any way analogous to the pop culture void left my Michael Jackson's death or the lack of drama in cycling in the years Lance Armstrong didn't wear those tight shorts. ) 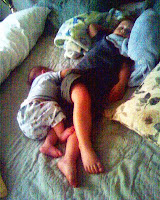 Now, I know there are people – men in particular – who would get their writing done, regardless of the demands of a day job and a rapidly expanding home population. I am simply not one of those men, and that’s not because of the writing I want to do, it’s because of the parenting I want to provide to my two boys. I just can't manage it all; if you can, that's great. You should write a book. Me, I'm figuring it out as I go.

My friend Bill told me a story about the other day about when he was out with his two little girls – both of whom are under five – and going into a neighborhood sushi place for supper. He met a guy at the front door who was leaving with a takeout order. Sushi Guy told Bill what cute little girls he had, and added that he had a couple of his own. Then Sushi Guy said, “Yeah, and I really hope they’re asleep before I get home tonight.” Bill’s reaction was exactly what mine would have been: a polite chuckle and a quick turn away. Whatever, Sushi Guy. How’s that working for you?


And then Bill had a lovely meal with his two lovely daughters. I don’t know if the little ones had raw fish – veggie tempura perhaps?


I know from talking to most of my male friends that, for us, fatherhood is different from what we received as kids. Not to fault our own dads, because, as my own father has noted, expectations were very narrow for dads even a generation ago. But I still meet a great many men who are like Sushi Guy, who, I suspect, take for granted the work done by others (a wife, a nanny, a relative, a day-care professional) in the parenting of their kids. And while there’s much to be said for career, there’s only so much time in each day. Whatever brilliant (or less-than-brilliant) work I might do career-wise would mean little to me if my kids and I weren’t close. Yes, Future Me notes, I have more money, but my kids find me remote and definitely non-cuddly.


The dads who change diapers and do the nighttime bottles and puree carrots and suck boogers and give baths and snap those goddamned tiny snaps, day in day out, have a much greater appreciation for their own partners and parents, and for the challenges of getting it all done each day. And I know this: The dads who are involved from the very beginning – as incredibly hard as it can be – wouldn’t give it up for anything. Rather, I give up what I must to be in the moment with my kids. 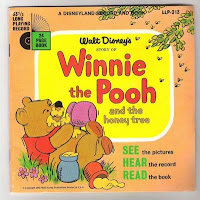 For example, last Tuesday night, I had intended to respond, inning by inning, to the MLB All-Star Game, but when the top of the first arrived, my oldest son couldn’t get to sleep, so I turned off the baseball game and we put in his new favorite DVD, the old Disney animated adaptation of Winnie the Pooh. This was a favorite of mine when I was a little guy, as it was for many kids born in the 1960s. I’m sure I watched it every time it was on The Wonderful World of Disney those Sunday evenings. But I even had the record album and picture book when I was a kid, and I wore out both.

Now, my son and I hadn’t yet watched the DVD together, so when I started singing along with the theme song – “Winnie the Pooh/Winnie the Pooh,/Tubby little cubby all stuffed with fluff,” his eyes went wide and it appeared I had blown his two-year-old mind. How do you know this stuff, Daddy?

Kid, if you only knew. We’re going to have a lot to talk about, I’m sure of it.

So that’s where I’ve been and what I’ve been up to the past couple of years. Taking care of the daddy details and making friends with a couple of little boys. I don’t think of my writing again as any sort of comeback at all, I’m just coming back to the keyboard after some very good time spent on more important matters. I hope the boys, when they learn to read, might agree.
by Unknown 4 comments:

On both Andrew Seal's Blograhpia Literaria and Mark Athitakis’ American Fiction Notes, we find the table of contents to a book of the 100 Greatest American Novels You've (Probably) Never Read, by Karl Bridges. Lists like these are always subjective and open to debate, and I believe that's why we love them so much. Defining the canon is so maddening in the first place.

As a reader, I do not particularly well as far as what I've actually read on this list (I've got five), although I have to say that while I've read some of these authors, the representative titles are perhaps not the best choices. I've got Brockden Brown under my belt -- I even teach Wieland -- but why Edgar Huntley? From the first page in the table of contents, Harry Crews, Don DeLillo, Philip K. Dick, Ernest Gaines, and John Hawkes I've all read, and several titles from each, but not the particular selections offered by Bridges. I suppose these are overlooked authors in some cases, overlooked works in others. Much head scratching.

Still, I would have to disagree outright with many of these choices. As one comment on Blographia pointed out, DeLillo is thought to be good by some, but few few readers would offer The Players as his best work. I can think of a half dozen DeLillo works that are more rewarding. I've even taught DeLillo's End Zone to high school students with great success, and very few people have ever heard of that one. Let the discussion begin.
by Unknown No comments: