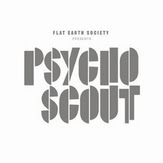 Song, Artist, Album
“I Can't Give You Anything But Love,” The Young Brothers, Tales of Time
The brand new release and debut album from The Young Brothers Trio has fresh new and exciting interpretations of old standards performed by pianist Tim Young, brother Alphonso M. Young, Jr. on the drums, and bassist Bhagwan Khalsa with guest appearance by saxophonist Ben Boker, vocalist Sara Jones, and guitarist Todd Harrison. (Ed's Pick)

“Infant Eyes,” The Columbus Jazz Orchestra, The Colors of Jazz
From the heart of Ohio comes a big band under the leadership of Byron Stripling, the CJO – and its latest release features a balanced mix of tunes, all arranged with precision and rich textures. The playing is outstanding on every track, and for large group fans, this independent release is as good as you will likely find anywhere. (Mark's Pick)

“Born Lucky,” Anders Blichfeldt, Born to Be Blue
This collection of songs by Danish Rock star Anders Blichfeldt and the Danish Radio Big Band captures a swinging vocal performance by the singer on a selection of original and blues/rock standard tunes delivered in a bluesy/ jazz setting backed up by a renowned international big band. (Ed's Pick)

“Rush Hour,” Out To Lunch Quintet, Live at the Artists' Quarter
A group of Minneapois musicians take on the performance of Eric Dolphy’s work. A live recording of imaginative and free musicianship before a enthusiastic audience. (Mark's Pick)

"Keep It Simple," Joris Teepe's Groningen Art Ensemble, Jazz In, Jazz Out
This recording is a project by the Hanze University of Groningen, the Netherlands, where internationally renowned bassist and educator Joris Teepe and his New York-based group, Groningen Art Ensemble record an album of varying jazz styles from bop, straight-ahead, classic to funk. (Ed's Pick)

“Psychoscout,” Flat Earth Society, Psychoscout
One of Belgium’s best groups of the past decade takes on the American audiences with its unique blend of jazz and rock in the style that will remind listeners of the best Frank Zappa groups from the 1970s. All that and some fine clarinet playing, too. (Mark's Pick)

“Marmelada,” The Bias Project #1, Rodrigo Ferrari-Nunes
The debut album of Brazilian-born bassist Rodrigo Ferrari-Nunes is dedicated to the music of Mingus, Coltrane, Parker, Evans, Hubbard and Brazilian composer Hermeto Pascoal. A burner of a CD with no samba here. (Ed's Pick)
Visit Ed Blanco's page at All About Jazz
by Unknown 1 comment:

Throughts on the First Show 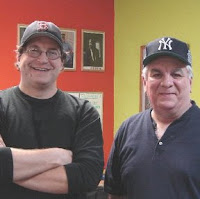 The first ever segment of "Straight, No Chaser" has come and gone, and after weeks of preparation and anticipation, Ed and I were happy with the results. While naturally it wasn't entirely bump-free, Ed was relaxed and as smart as ever on the air. If he was nervous, which he said he was, it didn't appear so to me. From the production side, I had a little glitch with a CD I had (supposedly) burned, but luckily was able to sprint out to the car where I had suitable backup music. Ah, the thrills of live radio.

You'll note in the picture (above right) that Ed and I wore the caps of our respective native baseball teams. Unlike many bandwagon Yankee fans, Ed's been following the Bronx Bombers for decades, so in my book he's all right. He even said some nice things about the Red Sox '04 championship team. And we both agree that A-Rod is a -- well, a person a questionable quality, although I believe we used more colorful language at the time.

The playlist from SNC is not included in today's other posting from Early Jazz Weekend. You will be able to find the SNC set list along with capsule reviews from both Ed and me on Monday -- maybe Sunday night -- on a regular basis. We took so much time to find the music, we both feel it's worth it to say a little more about our picks.

All in all, we had a lot of fun today. Be sure to tune in two weeks from today (January 27) for the next edition of Straight, No Chaser.
by Unknown No comments: 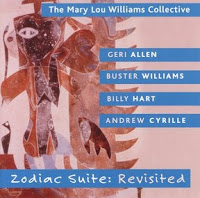 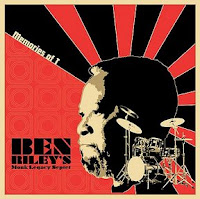 My Sax Life by Paquito D'Rivera 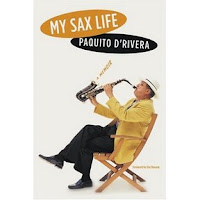 Born in Havana, Cuba in 1948, Paquito D’Divera was raised from a very early age – under the close supervision of his virtuoso father – to be a musician of the first order. A child prodigy on the clarinet and saxophone, D’Rivera became famous in Cuba and in Puerto Rico performing in classical concert halls and on television in all sorts of musical styles. While working in the inconsistently tolerant artistic environment of Castro’s Cuba, as a young man, he became one of the founding members and eventually the conductor of the Orquesta Cubana de Musica Moderna. D’Rivera was also a founding member and co-director of the innovative musical group Irakere, whose explosive mixture of jazz, rock, classical and traditional Cuban music had never been heard before. The group toured extensively throughout America and Europe, won several Grammy nominations and a sole Grammy.

Then, in the early 80s, stepping off a plane in a Madrid airport, D’Rivera left his musical life – as well as his wife and son – behind in Cuba, defecting in hopes of a better life. In very little time, at least professionally, D’Rivera had settled in New York and was performing, recording, and writing music – in both the classical and jazz worlds -- as never before. These days, of course, D’Rivera has reunited with his family and rebuilt his life as have so many Cuban exiles – two million, is it? – around the world.

With talents that reach beyond the world of music, D’Rivera published a novel, Oh, La Habana, and now the English translation of his memoir Mi vida saxual, known to us gringos as My Sax Life. Weighing in at a generous 349 pages, My Sax Life is a bawdy, intelligent, artistic, and unconventional work of autobiography. Without being egotistical or self-indulgent, and with good-humor and a great deal of heart, this book offers more than a poquito of Paquito on every page. Although I’ve never met the man, it seems safe to say that the personality of the author comes across in each anecdote from his native Cuba, each detailed memory of performing, each gleefully recounted practical joke or naughty story, each off-the-cuff rant against Castro and communism. There is rarely a dull moment.

D’Rivera is at his best when he writes about music, musicians, and other artists, as well as when he describes the distinctive qualities of the Cuban national character – if there is such a thing. He is most shockingly entertaining when he permits himself to be profane and even crude. Unfortunately, he can be tedious when, as often and understandably happens, he falls into the one-note political riff so many Cuban exiles are – understandably – prone to.

But, as anyone in Miami will know, you can’t dislike someone like Paquito for long for his politics – he’s just got too much talent and charisma. And My Sax Life is no different. Like any good jazz performance and jazz performer, you won’t know quite where you’re going when you get started with D’Rivera, and you might not like a few things along the way, but when the show’s over you heard some things you’d never heard before and you were glad you came.
by Unknown No comments:

Straight, No Chaser featured at AAJ

My radio partner Ed Blanco and I were grateful to see that our new music show, "Straight, No Chaser" was a news item on the AllAboutJazz.com website today. Ed, of course, is a writer for AAJ, so we have an inside track -- but I'm impressed nevertheless. Ed and I have been working since the last membership drive at WDNA to put together what we think will be a worthwhile listening experience.

Ed and I agree that jazz is in a very good place these days, but that, unfortunately, there's still so much music coming out in a given year -- 1000 releases or more -- that few people have time to listen to everything. We don't either, but as critics, hopefully, we can wade through the bad stuff more quickly and keep an ear open for up-and-coming or overlooked artists on small or independent labels, outside of major media markets, or even outside the country.

At any rate, we hope you'll tune in to Straight, No Chaser on Saturday, January 13 at 8:00 am. I'll be on the air for Early Jazz Weekend Session as usual this weekend.

Passing Notes this Friday (10:06 am and 7:06 pm) is a review of the book The Future of Music and some loose comments on the recently announced iPhone.

That's all for now. I need to get my sleep and rest up for the end of the week!
by Unknown No comments: 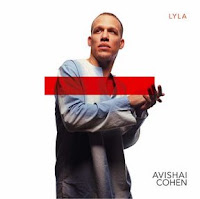