From the archives, thoughts for the start of the holiday shopping season about how money can be saved -- or not. With extra Rankin/Bass goodness.  Follow the Feedburner or iTunes links below to listen.

At the Miami Book Fair, I sat down with Salman Rushdie to talk about his new novel, Luka and the Fire of Life

. Sir Salman (he was knighted in 2007) offered his opinions on the importance of imagination and storytelling, as well as his views on music (Frank Zappa and U2 in particular), writing, and, of course, which style of cricket is best. The full PN Unscripted podcast will be posted next week on iTunes and Feedburner, but in the meantime you can listen to today's Passing Notes feature at 11:05 am on 88.9 FM in Miami (online at wdna.org) or follow the links below.

My students will tell you that I got on a bit of a word-bender the past couple of days with a fun quiz (well, it was fun for me, and it didn't go into the grade book) about words for animals -- that is, the terms for a given animal in a group, the male and female of the species, and the young.  For instance, if we're talking about cats, the group name is a clowder, the male is a tom, the female is a queen, and the young is a kitten.
With Thanksgiving upon us, I hereby make the suggestion that we use the corresponding terms in relation to the turkey --who, as a group are called a rafter, as a male a gobbler, as a female a hen, and as young, a poult.  I particularly like the first term, as in, "I'm so hungry I could eat a rafter of turkeys."  And then, perhaps, you would be banished to sit with the kiddies and have to contend with fitting your knees under the edge of the folding card table.
I would also suggest another act of lexicographical tomfoolery. In your best know-it-all voice, pronounce to the table, "It's a little known fact that Thanksgiving was originally established as a holiday by the Holy Roman Empire after the Concordat of Worms in 1122, in memory of one of the great martyrs of the age, Meleagris Gallopovo, who, sadly, was pecked to death by pagan gamefowl." Or make up your own facts.  Look up the name of my martyr and you'll see the joke.  Let me know how that works out for you.
Happy Thanksgiving, everyone.

It's a nerd trifecta today with David Tennant of Doctor Who fame (1) hosting a BBC 2 feature on how author Roald Dahl (2) influenced British pop music (and 3).  You'll want to go to the BBC website and listen soon, as the show will be available only until Sunday.  Twisted? Yes. Delightful? Yes. Nerdy? You betcha. 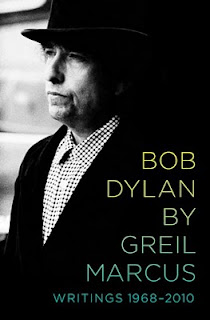 As promised, here's the full podcast of my long talk with Greil Marcus about his new collection of writings on Bob Dylan.  We covered the long, legendary, frustrating, and ultimately redemptive career of Dylan, his roots and his approach to performances, as well as his relationship to The Band.  Along the way, we chatted about the tradition of the minstrel show, about Al Jolson, and, as always, Marcus hiply dropped the names of some musical acts -- that is, those that he sees as having a comparable sense of roots to Dylan's  We even managed to dig into the WDNA music library and play some blues and jazz that Greil Marcus thinks about when he thinks about Dylan.  Bob Dylan - Writings 1968 to 2010

is published by Public Affairs.

We have a movie trailer showdown today -- The Green Hornet versus The Green Lantern.  I'll be brief.  While The Green Hornet features a director I admire (Michel Gondry of Eternal Sunshine of the Spotless Mind) and an actor who promises to be funny in the role, Seth Rogen, the trailer is so full of humor, effects, and outright vigor that I suspect what you see there is pretty much what you're going to get in the theater.  That is, the movie is the trailer, but without the two hours of sitting.

The Green Lantern trailer is more of a puzzle.  Director Martin Campbell is perfectly acceptable - Casino Royale and The Mask of Zorro being high points in his career.  And, no apologies here, I'll watch Ryan Reynolds in most things, just because he cracks me up.  It appears that Hal Jordan has a bit more of a sense of humor here than in his comic book incarnation, and it doesn't look like the marketing department felt it necessary to give away everything.  How do you market GL anyway, if you're going beyond the fanboy base?  Think about it. 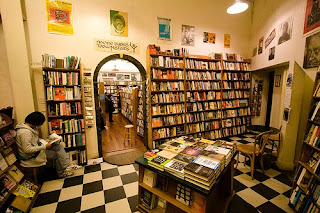 After a weekend full of books and writers, I've got a little bit of word-burnout, but it's nothing a goofy movie and a good night's sleep won't remedy.  In the meantime, before Passing Notes moves back to a little more music and a little less literature, allow me to leave you with this excellent article from The Lonely Planet website listing the Top Ten bookshops on the planet.  I might be a little biased, but San Francisco's own City Lights is number one.  First baseball, now bookstores. What could possibly complete the trifecta?