I try to avoid writing about the Red Sox too often, but I’m on vacation in New England this week, and the latest scandal related to performance enhancing drugs (PEDs) is centered around Boston. As the New York Times has reported, Boston sluggers David Ortiz and Manny Ramirez had their names on the 2003 list of players two tested positive for some form of PED. Add to this, the now-Dodger Ramirez’s 50-game suspension for PED use, and the revelation that the Red Sox fired two staffers last year for suspicious conduct related to PEDs, and you have the Nation Haters foaming at the mouth. As if it’s not bad enough, one of the fired Sox staffers is Jared Remy, son of the wicked popular NESN broadcaster Jerry Remy, who’s off the air this year as he battles cancer. Talk about a family affair. 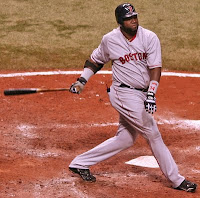 The broader question arises: Does the current scandal tarnish the 2004 and 2007 championships ? In my informal survey of everyone down at the general store, the answer cuts both ways. The championships are tarnished, of course, because everyone – including many die hard fans – would like them to be pure. On the other hand, the championships happened at the end of the Juiced Era, when everyone is suspects and few people tell the truth. The most important thing now is for Ortiz and the Red Sox to be as forthcoming and transparent as possible and get this behind them. And the best thing to happen would be for the Red Sox to win another championship. I got your PED right here!
What Major League Baseball should do is work out a deal with the Players’ Association and finally release the names of the 100 plus players who tested positive for some sort of PED in 2003. Everyone can have a chance to confess, deny, apologize, whatever -- and then move on, for Pete's sake.
If you’re a fan and have worked up a sense of outrage over all this steroid stuff, you should read Jose Canseco’s Juiced and the excellent Game of Shadows. It does help a fan to understand the mindset of professional athletes who see their peers getting an unfair advantage in a system that looks the other way. With PEDs in baseball, starting in the late 80s, the problem was systemic. Although we like to blame individuals, everyone is to blame and everyone got cheated in some way: Fans, players, owners, and the game itself. 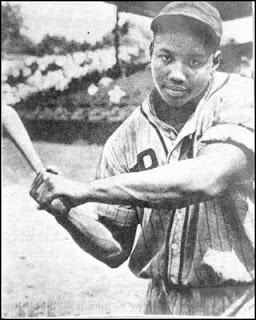 But think of baseball’s color line -- not fully broken, I would argue, until the 1960s. Of all the players in the major leagues between 1868 and 1947, the year Jackie Robinson broke in with the Dodgers, they never had to complete with African American or Latin players. Are all those individual and team records and championships invalid because, in truth, those white players never competed day-in-day out against all the best players? After all, it was the more integrated National League that started winning All-Star Games and World Series as the 50s and 60s continued. How do you reach a conclusion as to who was better, Josh Gibson or Babe Ruth? As I said, in a systemic problem, we all lose.
by Unknown

A couple of points I would add:

1) It might be premature to refer to this as "the end" of the steroid era; there are more and more sophisticated ways of masking PEDs (just ask Manny), so there's really no way to know whether PED use is ending, is waning, is on the increase, or will EVER end.

2) There have been banned substances for a long time in baseball, and players have used them long beyond the time of their bans:I give you the spitball and amphetamines.

Oh, and when you see "Weather Boy" in your comments, it is me, Dave!

Dave, my friend, I love and respect you.

I would just point out that today, in my local paper, I found the following article from the Associated Press, "Steroid Era Over - Not Just The Way We Imagined."

So we can agree that each era should be judged in and of itself?

I can definitely agree with that. There are so many eras anyway: Dead Ball, War-Time, Segregation, Post-War, High-Mound, Steroid...and so many people who love to try to compare eras through numbers. It doesn't really work, though, and I'm fine with that.

Here's a very informative post about the legal framework of the list of 104 names and what it would mean to release them. . .