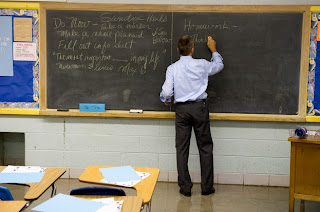 When Hollywood Tony is talking about Steinbeck's Of Mice and Men, the lesson seems to still be more about Tony than it is about Lenny and George and the students in Danza's 10th grade English class.  Not much seems to have changed from the first episode, when everyone just wanted Hollywood Tony to stop talking so much.  As the class tackles Of Mice and Men, familiar problems appear. Some students don't read, some claim they can't understand the material, while the ambitious and bright Monte dismisses the novel as being "a seventh grade book," and makes it clear that he doesn't want to be held back by a teacher.  He's got plans.
To address the issue of students not reading -- always the primary impediment to any lesson in literature, Hollywood Tony decides to give a quiz over the first two chapters.  As he puts it, "my first quiz.  It's not even on the curriculum, I just threw it in." If you watched last week, you know that when Hollywood Tony  is on stage, it's not going to end well.  When half the students fail the quiz, they feel horrible (although many of them are to blame), and the emotional and professional repercussions just about drive Danza out of the job.  he feels the responsibility. Even Monte, who does well on the quiz, is concerned that, for him, it was too easy. Everybody's failing in one way or another.
At this point, the professionals step in.  The problem of insufficient effort and incompatible learning styles is addressed immediately by Danza's instructional mentor, David Cohen: "This is the struggle that most of the teachers in the school are up against."  Cohen also adds that when students who have been tested and confirmed as having learning disabilities ask to go to the resource room, they must be allowed to go.  When Hollywood Tony brushes off the issue as a matter of effort, he is quickly passed up the chain of command, coming to rest in Principal Linda Carroll's office.  She reminds Hollywood Tony that he would be wise to follow the advice of professionals and to follow school policies.  Don't mess with the law, Mr. Danza.  And, she adds, "You don't get the title of teacher until your students are learning."
As a teacher myself, it's comforting to see people sticking up for the difficulty of the profession and dealing honestly with the limits of how far pep and positive thinking will get you.  One really feels bad for Danza, who is obviously a guy with a huge heart -- and you can see him trying to connect with the students.  But sometimes, it isn't always a matter of effort, and often, it takes a very long time to reach young people.  One must have patience and persistence and humility and flexibility.  Hollywood Tony's need to be liked and win people over is his worst enemy, but his emotional accessibility is his greatest strength.

When Danza is at the breaking point, a very compassionate administrator finds him at his desk, defeated, weeping.  You're allowed to be emotional, she says.  This is an emotional business that we're in.  We've all been there.  And you can see the professional teachers picking up Danza in his most teachable moment -- when the Hollywood Tony persona is gone -- and telling him he can do it.  Because everyone knows he has the heart.  Finally, we see Mr. Danza make an appearance in Act 5: "I guess I'll have to adjust my thinking."
My favorite moments in the series so far have been when Danza encounters parents -- first in the last episode at a Friday football game, and in this episode in two parent conferences.  One parent of a stubbornly uninvolved student meets with Danza in conference and gives him permission to stay on her, and also makes the suggestion of providing students and parents with an assignment sheet so parents can help make sure kids are doing assignments.  I'll try it, says Mr. Danza.  But, this being a television drama, there must be a cliffhanger, and bright, articulate Monte (you knew it) has asked his grandmother to come in and talk to Hollywood Tony.  Last week, she tells Danza, Monte said you earned a 6 out of 10.  This week, you get a 4. Fade to black.
After two episodes, the broader purpose of the show is becoming clear -- that is, to show the real, agonizing drama that is inherent in the public school system.  The profound moments of 'Teach' are built around the tensions between innovation and bureaucracy, between bright students and struggling students, between passionate teachers and apathetic teachers, and between the expectations of school and the demands of the world outside.  As a character study and reality drama, it's getting better each time the new guy down the hall starts crying at his desk.  Hollywood Tony has got to go if Mr. Danza's -- and his students -- going to have a chance.