Review - Kneebody - 'You Can Have Your Moment' 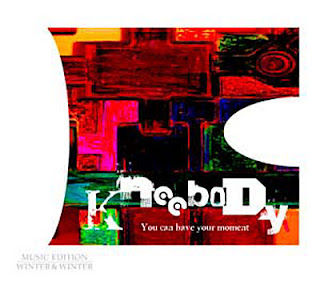 Like their music, Kneebody’s recording history moves around on you.  After their 2005 self-titled debut on Greenleaf, the group next appeared with singer Theo Bleckmann on 2009’s Winter and Winter release, Twelve Songs by Charles Ives, which earned a Grammy nomination.  This year’s release finds Kneebody with an advanced sense of collective musicianship and a carefully honed approach to improvisation.  Simply put, they don’t sound like anybody else. Their voice is born out of a group consciousness developed from an intimate approach to learning the songs (by ear, no sheet music here) and an idiomatic system of musical cues when playing together.

The opening track, “Teddy Ruxpin” seems a simple enough song, starting with a relatively straightforward and clean melody from songwriter Shane Endsley on trumpet and Ben Wendell on sax, but then it shifts to a more suspenseful set of phrases, finally landing in a most excellent and grisly rock groove.  Once the effects are punched up – and I’m not complaining – everyone cuts loose, with Kaveh Rastegar on bass and Nate Wood on drums pounding the song forward on the low strings and kick drum.  It’s clearly improvised, but it rocks very hard.  Apropos the title, this is no cute talking teddy bear of a song.  This Teddy Ruxpin is a nasty-ass bear with big claws that will tear your face off.  Following this, another Endsley composition, Held,” is more moderately paced, moves through a rich variety of harmonic changes, and presents Wendell in some extended explorations of the possibilities of the song’s structure. But Ruxpin has left an impression; you can’t wait to hear what’s next.

One of the most odd (and most successfully hypnotic) tunes here is keyboardist Adam Benjamin’s “The Entrepreneur,” in which the horns provide background accompaniment to a melody played by Ragestar and Benjamin (on the Rhodes).  The fascinating drumming on this track is reason enough in itself to listen; you would swear that Wood is playing them backwards. Maybe he is, and that would do things to your face, as well. The skipping, cascading melody of “No Thank You Mr. West,” by Wendell, creates a familiar context for solos from Benjamin – who is surprising melodic on the tune.  And Benjamin’s “You Have One Unheard Message,” with its blinking red light of a vamp, is built around two overlapping patterns that make more for interesting rhythmic improvisation than harmonic investigation.  The musicians make ample use of effects on this machine-like, comical tune.

Bassist Ragestar’s bluesy song, “The Blind,” written on guitar, is soulful but offers a dynamic and harmonic range that sounds unlike any blues you might know, and comes home to rest in a contented place.  Still better is the title track, “You Can Have Your Moment,” also by Rastegar, begins with a cheerful, hooky interplay from the rhythm section and an lovely, expansive melody from the horns.  But just as you think the song is going to lift you higher, it turns into a dissonant, crashing, and ultimately disappeared ending. Maybe the bear ate it. The irony of the song’s development is clear enough, but you’re really going to want to hear that melody again.

“Desperation Station,” by Benjamin , offers a similar sort of structural tension, as this slow, meditative song begins with a melody that sounds (sort of, but not quite) familiar, then wanders through a troubled landscape of echoes and effects, returning once again to its starting place.  The brief, spastic “Nerd Mountain” (Endsley) quite amusingly lurches forward, presenting one interesting hook after another, each of which vanishes into the next.  Shifting musical grounds abound, again, in Wendell’s “Call,” which layers shifting rhythmic patterns over differing time signatures, and, despite (or perhaps because of) the metrical complexity, the song offers some of the most lyrical solos from the band.  Yet another song that highlights Kneebody’s ability to alter textures quickly and confidently, “Unforeseen Influence” (Benjamin) also exhibits the best drumming from Wood.  You Can Have Your Moment closes with Endsley’s “High Noon,” a cycle-structured song in which you can hear the parts moving from instrument to instrument as the overall pattern is reset from time to time – presumably the “high noon” of the title.  Wendell delivers a muscular and determined solo that carries the song on his back to its close.

Kneebody is an ensemble dedicated to writing and performing music in which everyone can improvise, and not just by stepping to the front and blowing a wild solo – although there is plenty of that on You Can Have Your Moment.  The music is at its most interesting when the entire band suddenly takes a turn in tempo, tone, and texture – as when the grunge kicks in during “Teddy Ruxpin” or the lovely dream of “You Can Have Your Moment” turns to discord and shadows.  The musicians of Kneebody are strong writers, and they write for the group, and they clearly enjoy the process of discovering, in every moment, where the gear and joints of their musical structures will take them.  You might call it swing, but it’s a swing of structure – and that’s a newer development, perhaps.  Kneebody’s second release is full of excitement, imagination, and ambition. Most of all, it’s great fun and great music.  Let the teddy bear do his worst, but I’m putting You Can Have Your Moment on again.