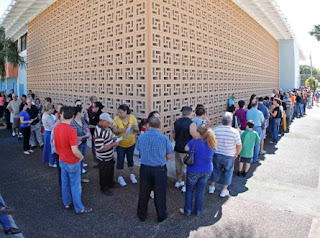 [transcript of broadcast]
I want everyone to know that my suggestions for building better elections come from a non-partisan place – or at least as non-partisan as I can manage.   I really don’t care to discuss the particular policy points of any political party – I just want to consider how we might get a better result from the general process of electing people to office.  I’m going to assume that an electoral system that encourages citizens to be informed, that strives to represent the perspectives of many different types of people, and that facilitates voter participation – that a system working from those principles would be worth having.  If you can’t come with me this far, then I can’t help you.

First of all, I think we need to know more about the money that campaigns spend on paid political advertising – particularly in television.  In the 2012 presidential campaign alone, a billion dollars (give or take) was spent on TV ads.  I have to wonder– given the profits that must come from political ads – how much television journalists and their bosses are willing to examine the truthfulness and reasonableness of what all candidates have to say.   It seems to me that there’s a conflict of interest at work here.  How tough can a reporter be on a candidate when his or her own station relies on that candidate’s campaign for revenue?

Now, the non-profit news organization Pro Publica has recently collected, in a very raw form, all the information that television stations were required to turn over about political ad buys.  But this information has not been sorted through in any way, so not much can be gleaned from it.  Not yet, at least.  Pro Publica is asking citizens to help them process the information through their ‘Free the Files’ project, which you can learn about and take part in by visiting their website – propublica.org.  Remember, we’re talking about billions of dollars directed toward national, state, and local elections.  It might be useful for us all to know the effect that all that money has on how we’re informed – or misinformed – about candidates and issues.

Secondly, I suggest that the presidential primaries be redesigned.  The current primary system is a reaction to the messy 1968 Democratic convention, and is designed to smooth out the process of choosing a presidential nominee.  These days, and perhaps even back in 1972 when it all started, New Hampshire and Iowa are not the places to begin the primary season.  Iowa and New Hampshire?  Both these states are far too rural and far too homogeneous to produce candidates that reflect the more general and diverse concerns of the rest of the country.

I propose – wait for it – a balanced presidential primary system – where groups of five or six states, both small and large, are divided into two week primary periods.  We could get through the primaries with a nice distribution of states over a five month period.  The first round primary, in February, might include Iowa (why not?), along with Maryland, Wyoming, Arkansas, Wisconsin, and Florida.  You can drop California by itself in the middle of the sequence. The final round (at the end of June) could have, let’s say, Mississippi, Maine, Minnesota, New Jersey, and Texas.  Granted, travel costs would be higher, but candidates would have to address a more representative range of issues in having to run for a much more diverse set of voters.

Finally, and most painfully (Florida, I'm looking at you)  we need to improve the voting system itself.  The guiding principle here should be to help more eligible people vote and increase the efficiency of the voting process.  We need to improve the ease of registration while taking reasonable steps to prevent voter fraud.  We need to create guidelines and accountability for how ballots are designed, as well as making sure that ballot initiatives are written so that each item is clear and concise.  Forget tradition, we need to move election dates to weekends – Saturdays and Sundays.  We need to stop treating early voting like a political football and set a standard early voting period and procedure.  We need to ensure that all voting sites have enough well-trained staff and enough materials and equipment for people to vote without confusion and excessive hardship.   There’s no reason why anyone in Florida, the next time we have an election, should be standing in line for five or six hours just to exercise one of the most basic rights we have.   I understand all the concerns about the process, but to deny or impede any eligible voter the right to cast a ballot is to do a great wrong.

So – improve the voting system, rework the primaries, and follow the TV money.  Let’s get started on that work as soon as we can.  We all deserve better.